Taking Off The Mask

In my book, I share stories about people who have inspired me. The opening story in the book is about John, a leader who I always admired.

John was not only the CEO of a big company, but everyone thought of him as their very best salesperson. Whatever he was selling, you were buying.

Whether it was with customers, prospects or internal meetings, John had that knack for moving people, without pushing them. He was the guy who would shift the tone; create shifts in others. After an interaction with him, I remember often going, “Oh, I think about that differently now.” And he seemed to do it so effortlessly, with such benevolence.

I asked people in the company why they thought he was able to be so casually effective. Everybody used to answer something along the lines of “John can get away with that because he’s the CEO”. For a while, I think I bought into that as well.

He reads it and we get on the phone together.

John: “Ben you’re missing something, you’re not really telling the story properly”
Me: “What!”
John: “You’re telling a story about how I interacted, but you don’t tell the story of why I’m like that”.

And he brought me back to the beginning and walked me through his professional journey: growing up in sales, coming from a sales engineering orientation, being a guy who checked off all the boxes, followed the protocols, the scripts, went through the play book, the stages. He talked about his life being a series of stages. He would get by, make quota, pay the mortgage and climb the latter. He talked about it being just a pretty robotic, mundane way of living. 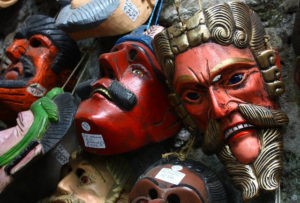 John: “You know something Ben, I finally had to learn to just take off the mask”.
And he said that in the most incredibly reflective tone. But what he said next, was a huge “aha” moment for me.

John: “Ben, the thing that always bothered me all these years being the CEO is that I didn’t know how to articulate my approach to everyone in the sales organization. What bothered me most was this – that people would say to me and say to each other ‘John can be that way because he’s the CEO’, and they have it backwards. I don’t relate that way because I’m the CEO, I became the CEO when I learned to relate that way.”

I think there is such a magical lesson in that. We don’t only put on a mask, we fully armor and suit up in this armor of know-it-all corporate-speak—we put on a façade that were are experts because we have to project perfection—and yet John’s lesson was that it’s about taking that armor and mask off.

I know that’s easier said than done. It’s one of things in life that is so simple but it’s just not easy to do. Those of you who have been through Storyleaders workshop have experienced this first-hand: It’s all about taking off the mask.