A Good Story is the Antidote

I was in New York City leading a workshop for Oracle. Afterwards, Nic, who was in our workshop, invited me to the second annual Oracle Financial Services Forum, an event geared toward Wall Street CIOs. Oracle’s president, Mark Hurd, was giving a breakfast keynote on the future of IT in financial services, particularly mobile technologies. About 80 executives were seated at tables on the main floor of the auditorium. More people filled the balcony, including many vendors and Oracle employees who wanted to hear what their president had to say.

After a few minutes of Mark talking about Oracle’s position in the marketplace, Oracle’s mobility offerings, and so forth, we looked at the across the room and realized that almost no one was looking at Mark. The CIOs had their phones out, checking e-mail, eating breakfast, and so on. We were amazed. Here was Mark, the president of one of the world’s largest companies, a man with a commanding presence, and hardly anyone in the room was giving him their attention. It was almost as if Mark weren’t even there.

Just then, Mark looked up from his slides, strolled away from the podium, paused and said, “A couple of weeks ago, I was in the car with my daughter, driving to the airport, trying to check the status of my flight on my cell phone. I couldn’t find it, and I was running out of patience. So my daughter says, ‘Just relax, Dad.’ Then she got out her iPhone and had the information I needed in about 30 seconds.” He went on to share what that experience with his daughter meant to him personally.

The story was short, and conveyed something that his slides failed to communicate: mobile devices are today’s communication standard and its never more evident than with the younger generation. But it wasn’t the point of his story that got me so much as the effect of it. It was the first time during his talk that we could feel where he was coming from. He drew us all in. It was as if he went from the robotic, company figurehead, to a real human being.

The moment he left his slides and shared this little, personal story, everyone in the room, without exception, turned their attention to Mark. The CIOs set aside their phones, put down their knives and forks, and listened. And even when Mark returned to his slides, the audience stayed engaged. People asked questions and took notes, and one of the CIOs even told a similar story about his daughter. 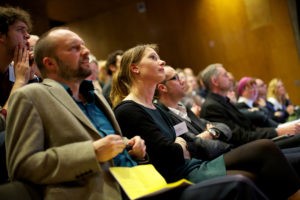 The moment he left his slides and shared this little, personal story, everyone in the room, without exception, turned their attention to Mark. The CIOs set aside their phones, put down their knives and forks, and listened. And even when Mark returned to his slides, the audience stayed engaged. People asked questions and took notes, and one of the CIOs even told a similar story about his daughter.

Once Upon a Time

What happened during Mark Hurd’s speech was no surprise. Our minds are wired to respond to a story. It’s intrinsic to who we are and how our brains function. As humans, we are natural story learners, storytellers, and story listeners.

Ever notice how the words once upon a time can calm a child? At bedtime, they’re like magic. Our children instantly relax. And the next night, without fail, our children ask, “Can you tell me another story?” Stories have a similarly soothing effect on adults. When we hear “Once upon a time” or “Can I tell you a story?” we nonconsciously respond, “Oh, it’s just a story. I don’t have to do anything or decide anything. I can just listen and enjoy.” At the same time that we relax, our heart rates slow, we focus and pay attention, because we are story learners, biologically wired to survive by learning through story. Our nonconscious mind is saying, “It’s just a story,” but it’s also saying, “I’d better pay attention, I might learn something.” This is the power of a story.
Simply put, stories feel good. On a visceral level, we are inclined to feel engaged with someone the moment that person says, “Hey, that reminds me of. . .” We are hard wired to lean in.

Can you imagine a better frame of mind to cultivate in someone? An audience. Someone you’re trying to sell to who has their guard up. Someone in your company you’re trying to gain consensus with. Your children.

For me, since I started asking people, “Can I tell you a story?”, I’ve yet to be turned down.